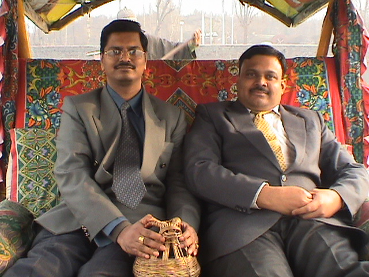 Memories from my Srinagar trip in December 2005 It was an official visit from Infosys at the invitation of the then Chairperson of J&K Bank - Dr Haseeb Drabu (later he was Finance Minister in J&K Govt). The trip was memorable for many reasons - Mr N.R.Narayana Murthy (then Chairperson of Infosys) was in the same flight with me from Bengaluru to Delhi and I experienced a massive earthquake during my stay at Srinagar (6.8 on Richter scale) that shook the entire State.   My hopping flight from Bangalore to Srinagar via Delhi on 13th December 2005, was flying a famous passenger - NRN and I grabbed the opportunity to be seated next to him. After introducing myself, I told him the purpose of my visit to Srinagar - to make a presentation on Infosys' Data Warehousing offering to the Chairperson of J&K Bank, an Infosys customer. He wished me good luck and also asked me to convey his wishes to the Chairperson - Mr Drabu, whom he had met just a few months ago at the Infy campus. O
Post a Comment
Read more

May 07, 2018
Sanskrit - An ancient global language Why am I terming Sanskrit a "global" language and not restricting to just being an Indian language? It's because Sanskrit is the "Mother of all Languages" and even great European philosophers like Voltaire, Immanuel and others acknowledged that Sanskrit was the root of all Indo-European languages. How many times have we unknowingly used words from the Sanskrit vocabulary, even while conversing in English. Its because Sanskrit words got embedded into Greek, Latin and Persian languages during the peak usage of Sanskrit in ancient times and these words have today formed a vast majority of the English language. Mother is derived from "Mathru", brother from "Bratha" are just couple of examples. When people all over the world watched the mega hit Hollywood movie - Avatar, little did they know that the word to describe "alter ego" was borrowed from Sanskrit !! It is a widely acknowledged fact
4 comments
Read more

April 18, 2017
Holy Cow….How Lufthansa saved my day This incident happened in June 2007 when I was returning back from a business trip to the US. I was travelling by Lufthansa Airlines from Washington (Dulles Airport) to Bangalore via Frankfurt. I normally do a web check-in atleast 24 hours before the flight and I also pre-book my meal especially when I travel to European countries or to United States. Though I am a non- vegetarian, by food habit, I strictly avoid beef as most devout Hindus do and this is the reason why I pre-book the “HNML - Hindu Non-Vegetarian” meal, which consists only of white meat (Fish or Poultry). I also ensure to check the HNML sticker on the food packet before I start my meal. While boarding the aircraft, I was offered a better seat in the same coach, which had better leg room. I could not refuse the offer and changed my seat. I was happy, that I could spend the next 8 hours without having to strain my legs and knees.   I had an American couple for company, wh
1 comment
Read more 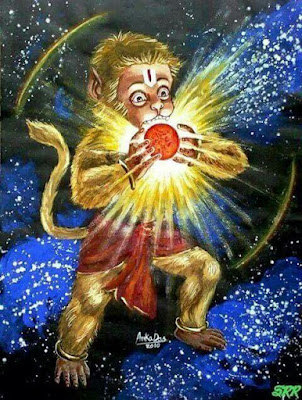 Hanuman the Original Superman Man created icons who could be role models for believers.  The heroes in Hindu mythologies are given the status of God like Lord Rama and Lord Krishna. Icons were created for negative personalities too and given the status of Rakshasas or demons. Just like we have role models in sportstars or actors, in the same way our ancient scriptures created the icons who are today worshipped as Gods.  Marvel comics created Superman, who comes to the rescue of human beings, with his supernatural powers. In the same way, in the Ramayana written by Rishi Valmiki many centuries ago or perhaps even milleniums before, created an icon for super natural power and named him Hanuman.  As a child, Hanuman acquired lots of boons from various Gods. He was able to fly from birth, which was a boon given by his father Vayu. He was once tempted to eat the Sun thinking it to be an Apple and flew to it. Apart from trying to snatch the Sun, Hanuman's chil
Post a Comment
Read more 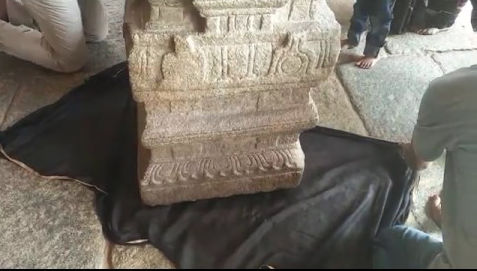 Lepakshi – Unexplored Architectural Gem of India There are several architectural wonders in India, some well known while many of them unknown to Indians themselves. One of the unknown wonders of India is the Lepakshi Temple, located less than 100 kms from the Bengaluru International Airport and about 50 kms from Puttaparthi, which attracts lot of tourists. Though I have lived in Bengaluru for a decade and a half, somehow I never made it to Lepakshi until I started doing some research on the “unknown gems” of India. The drive to Lepakshi is just under 2 hours from Bengaluru city if it happens to be early Sunday morning. Located in the neighbouring state of Andhra Pradesh, Lepakshi is almost a border town. You will cover most of the distance on National Highway #7 and just 15 kms on the State Highway. The entire stretch is simply superb and you may stop by to have breakfast on the way. Ramayana and Lepakshi Lepakshi finds an important place in Ramay
10 comments
Read more
More posts

Arvind Kamath
A Finance & Accounting professional for 8 years - tasted success in the IT industry for 16 years in various domains - quit corporate career at 47, to start an entrepreneurial venture in the Education space - Now actively involved in the Social sector for past 2+ years. He is an active blogger, who has travelled extensively around the globe. His travelogues are available on YaatraTales.com, some of which have been published in Newspapers (ToI, ET, BM, DH) and Magazines like Lonely Planet, The Week etc. Arvind strongly believes in the adage "Be the Change you wish to see in the World".